Fill us in on the details of your print needs and we'll provide you with a prompt and informed quote.

Get Started - Choose Product Below

Custom Order
Do you have a custom job that you want purchased? Contact us to help you bring your project to life.
Get A Quote

Re-Order Now
Have you placed an order before? We can quickly re-print your order, that was kept on file, saving you time and money.
Start Now
X

Printable Order Forms - Fill in these forms to get started.

Fredericton Transit is introducing a new security feature to its monthly bus passes, several months after a CBC News story revealed how easy it was to copy the previous passes.

Wayne Knorr, a spokesperson for the City of Fredericton, said the transit service decided to add a hologram to the monthly bus pass to guard against future forgeries.

“The suggestion from the successful vendor was to use a hologram. As I said, the hologram is virtually impossible to copy or to duplicate,” he said.

Rainbow Printing won the bid to design the new Fredericton Transit passes. The company had been making the passes until the end of 2013, when it lost its contract to a lower bidder.

Knorr said on Wednesday that possible forgeries were not the reason the city switched back to Rainbow Printing for its bus passes.

“From a financial perspective and from a security perspective, the right thing to do was to put a hologram onto the passes,” he said.

The holograms will first appear on seniors’ passes next year and after that, they will gradually be phased-in for all passes on the system as the existing stock of rider cards runs out. 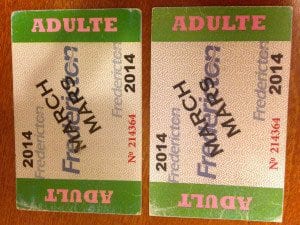 Sign up to receive special promotions, and the latest news

Never miss the latest deal, or what's new by signing up for our newsletter by entering your email below!